Members of the Clan Currie from around the world gathered on the Scottish island of South Uist to attend an important symposium on the history and literary heritage of the MacMhuirich Bardic dynasty as part of a weekend of celebrations dedicated to Scotland’s greatest bardic dynasty, the Clan MacMhuirich or Clan Currie.

The weekend also included a welcome reception at the Kildonan Museum, a ceilidh on the neighboring island of Benbecula featuring top talent, and the dedication of a new memorial cairn at Stilligarry, home to the MacMhuirich bards for hundreds of years.

The MacMhuirich symposium, held in the centenary year of the passing of famed Gaelic folklorist, Alexander Carmichael (1832-1912), was held in the village of ìochdar, South Uist. Clan Currie Society president Robert Currie commented, "How appropriate it was to host our Symposium in the village of ìochdar, as it was here in this village that Carmichael first met Janet Currie in 1865, (still known by her Gaelic name, Seonaid Nic Muirich) who shared stories of the Clan Mhuirich and island life." 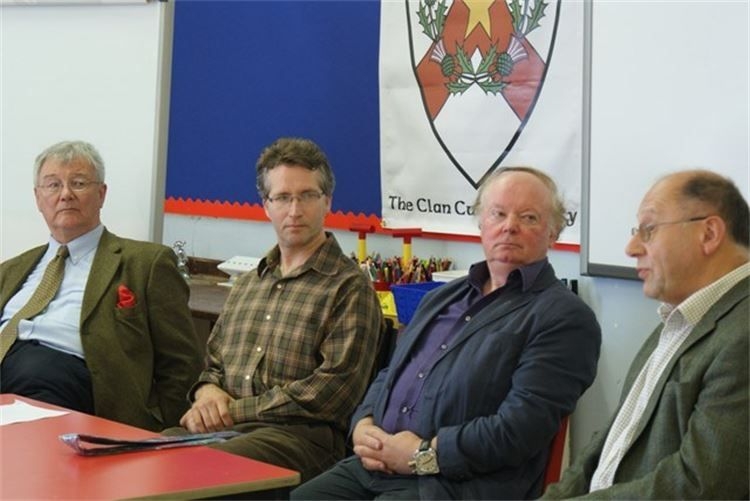 Dr. Currie commented, “This was an especially well-chosen panel of speakers. With their combined areas of expertise, the entire history of the Clan MacMhuirich was represented, starting with Prof. Titley’s presentation on Muireadach O’Daly and the Irish origins of the clan in the early 13 century. Prof. Gillies spoke of the MacMhuirichs who served as bards to Clan Donald, while Angus MacMillan presented new research on the last century or so of MacMhuirich tenure as bards to Clanranald at Stilligarry and of an overlapping set of MacMhuirichs who then continued to act as bards when the Clanranald chieftainship moved to the adjoining Island of Benbecula. Dr. Newton followed the bardic line from Scotland to Nova Scotia in the 18 century and offered some fascinating insight into the clan up through the 1930’s.”

The last presentation of the conference came in the form of a field trip to the village of Stilligarry and the medieval ruins at Baile name Bàrd (Township of the Bard) as it is known in Scots Gaelic. Council Archaeologist Deborah Anderson led attendees through the findings of a test trench dug within the foundation of the site which as she reported was clearly the home of an important family given its sheer size versus similar homes of the period. 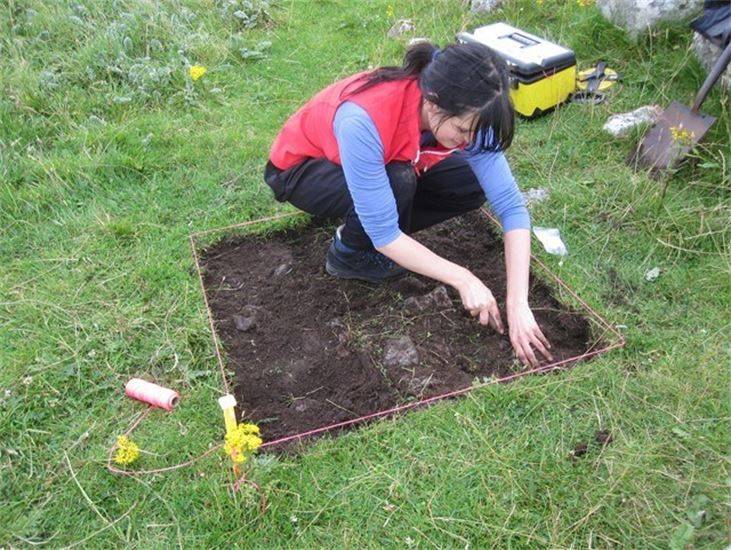 Robert Currie also outlined plans for a future expanded excavation of the site to learn more about life in the Outer Hebrides and particularly this impressive home which may have also served in the capacity of a bardic school. Stilligarry was the home of the Clann Mhuirich, Hereditary Bards to the MacDonalds of Clanranald for over 300 years. It was from this site in South Uist that multiple generations of MacMhuirich bards penned the Gaelic literary masterpiece, the Red Book of Clanranald.

Later that evening, a clan dinner was held at the Dark Island Hotel in Benbecula followed by a sold out ceilidh which featured outstanding community talent led by Gaelic Mod winners Paul McCallum and Niall Campbell and singer Catriona Garbutt.

On Sunday afternoon, members of clan and community gathered together at Stilligarry for the dedication of the new memorial cairn (monument) in honor of the MacMhuirich bards. A unique feature of the cairn is a collection of stones submitted by clansfolk from the four corners of the globe representing the clan's far-flung sons and daughters and the Scottish Diaspora. Stones came from as far away as New Zealand and South Africa.

The ceremony began with selections from the Liniclate Youth Pipe Band under the leadership of Donald MacDonald and was led by the Rev. Dr. Currie. Currie’s Homily included Scripture from the Old Testament on the meaning of cairns as a place to commemorate and remember. Currie also compared the exile of St. Columba with that of Muireadach O’Daly, both having left Ireland for Scotland. “Sometimes the clearest way to the future is through the past. Making pilgrimage to South Uist to honor our MacMhuirich forebears with a cairn reminded me of the words of the prophet Samuel, ‘Thus far has the Lord helped us.’ I look forward to how the Lord will help us continue the journey together with the many new friends we made on South Uist and Benbecula.”

The cairn, shrouded under a bolt of Currie tartan was officially unveiled by Robert Currie and Stilligarry crofter Alasdair MacDonald. Piper Angus MacKenzie performed a new pipe tune, “The Clan Currie,” commissioned by the Society especially for the occasion and composed by renowned piper and Gaelic historian Iain MacDonald.

Alan Currie and Prof. Gillies delivered a new MacMhuirich poem, “Baile nam Bàrd Sleeps No More” in English and Gaelic. The ceremony concluded with the monument being christened with the “water of life” and a brief appreciation delivered by Gillies. Prof. Gillies expressed his delight that “Clann Mhuirich is amongst us again and that they were willing to make their dream of a memorial at Stilligarry a reality led with a good heart, with energy and vision. 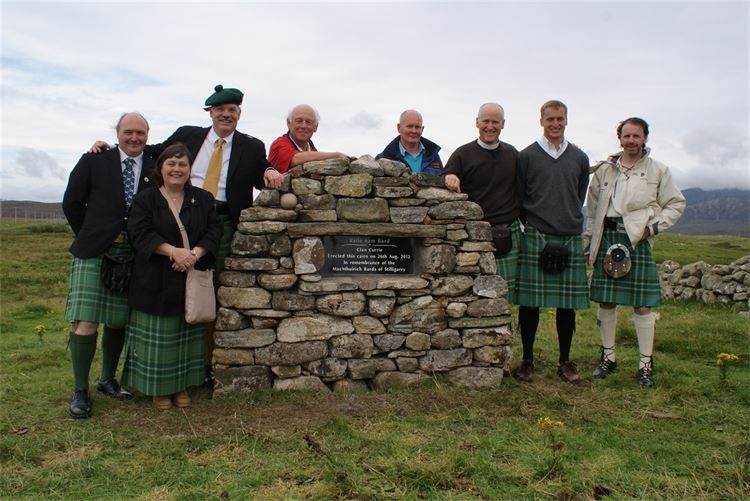 The cairn was made possible through generous donations from members of the worldwide Clan Currie. Additional donations will be accepted through the end of October to help the Society reach their fundraising goals for the project. All donors will be listed on a scroll to be presented to the Kildonan Museum in South Uist. They will also receive a special commemorative item from the dedication ceremony.

Alasdair Allan, Regional MSP attended the Symposium, ceilidh and cairn dedication. “I was pleased to have been invited to attend a series of events, organized by the Clan Currie Society to commemorate the MacMhuirich bards who lived and worked on those islands for centuries. The contribution made by these bards to Scotland’s literary heritage is of immense importance. The Clan Currie who, along with many Macphersons and MacMillans on the islands can claim direct descent from the bardic line, are to be commended for keeping this proud history alive.”

The highlight of the weekend for me was the unveiling of a new cairn in Stilligarry. It's a fitting tribute to the bards, built on the site of one of their former residences and is well worth a visit. I know that the Clan Currie’s interest in Benbecula and South Uist will continue and I look forward to further ventures which will bring mutual benefit to their Society and our communities alike.”