Simon Chadwick, a noted expert on the early clarsach (Scottish harp) and Gaelic culture is the latest panelist to join the first annual MacMhuirich symposium produced by the Clan Currie Society. The symposium takes place in Edinburgh on Saturday 23 July 2011 as part of a weekend of celebrations dedicated to one of Scotland’s greatest bards, Lachlan Mòr MacMhuirich (1370 – 1438). 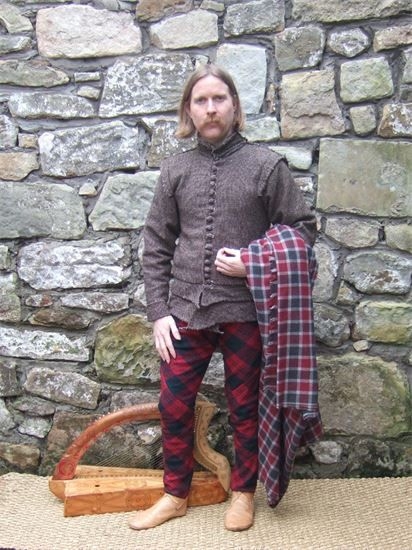 The MacMhuirich symposium, being held in the Royal Scots Club, will bring a new perspective to the role of the MacMhuirichs in Scottish literary history. The MacMhuirichs, a name later anglicized to ‘Currie’, served for over 700 years as professional poets to the Lords of the Isles, and later to the MacDonalds of Clanranald.

"I am honored to join this distinguished panel of experts at this important symposium," said Chadwick. "The core of my music is the historical harp repertory of Scotland and Ireland, played on the clarsach. This early Gaelic harp music played from medieval times to the eighteenth century was embedded in aristocratic Gaelic culture, and was transmitted and performed in an oral tradition. No doubt the MacMhuirichs of old were accompanied by the clarsach as they delivered their vast output of poetry commemorating all aspects of court life from praise and worship to battles and laments."

The MacMhuirich Symposium follows after the installation of a new commemorative stone to be unveiled in Makars' Court of the Scottish Writers Museum in Edinburgh on the previous day, Friday 22 July at 11am – the public are cordially invited to attend this event. The stone, sponsored by the Clan Currie Society, is dedicated to one of clan’s most celebrated Bards, Lachlan Mòr MacMhuirich. Chadwick will also perform at the unveiling of the MacMhuirich stone.

The unveiling of the Makar’s Stone for MacMhuirich will take place on the eve of the 600 anniversary of the Battle of Harlow. It is said that MacMhuirich’s Harlaw Brosnachadh, or ‘Incitement to Battle’, was delivered by him on the eve of the Battle of Red Harlaw on 24 July 1411 to inspire the army of the Lord of the Isles to victory in the following day’s battle. The first lines of MacMhuirich’s war poem, The Harlaw Brosnachadh, have been etched on the stone.

Robert Currie, President of the Clan Currie Society in New York, commented: “We are delighted to have Simon Chadwick join our blue ribbon panel of experts at our inaugural symposium. The clarsach was the instrument of the bards and this serves as an important addition to our program.”

A warm invitation is extended to all events over the weekend of 22 to 24 July, including a celebratory dinner on Friday evening following the unveiling of the MacMhuirich Stone, and to take a cruise to Incholm Abbey (on Incholm Island, Firth of Forth) on Sunday 24 July. For further details and information on how to register for each event visit www.clancurriegathering.com

1. The Makar’s Stone will be unveiled at the Makars' Court of the Scottish Writers' Museum in Edinburgh on Friday 22 July at 11.00am. The Clan Currie supported the erection of the stone through a donation of £2,500 to Edinburgh City Council. The detail of the stone is as follows:

[From the opening lines of his poem ‘The Harlaw Brosnachadh’ (Incitement to Battle) written in Scots Gaelic, 1411.)

The Makars' Court at the Writers’ Museum in Edinburgh celebrates the achievements of Scottish writers.

2. About The Clan Currie Society

The Clan Currie Society, an American-based, international, non-profit cultural and educational organization, is the preeminent Scottish-American cultural society in preserving and promoting Highland heritage at Scottish Games, ethnic festivals, as well as community groups and classrooms.

Commissioned to mark the 10th Anniversary of Tartan Day on Ellis Island, New York, the Society recently launched the Ellis Island Tartan. An everlasting tribute to everyone who passed through Ellis Island on their way to a new life in the United States of America, the “potentially world-beating tartan” (Scotsman) has received wide acclaim since its launch. It was featured on the runway at the annual Dressed to Kilt fashion event on 5 April 2011, part of New York’s Tartan Week celebrations.

The Society's signature events include The Pipes of Christmas - a musical celebration of Christmas performed on bagpipes and brass, harp and fiddle, and organ - and the annual observance of Tartan Day on Ellis Island. The Clan Currie Society is the Title Sponsor of the National Scottish Harp Championship of America.

The Society was originally formed in Glasgow, Scotland in 1959 to further the knowledge and appreciation of the MacMhuirich (pronounced MacVurich) bardic dynasty. Today, the organization is a respected producer of outstanding programs and events to honor Scotland's rich culture and ancestry.

The MacMhuirichs served for over 700 years as professional poets to the Lords of the Isles and later to the MacDonalds of Clanranald among other prominent Highland clans and families. The Red Book of Clanranald, one of Gaelic Scotland's literary treasures, was penned by successive generations of the MacMhuirich family.

In more contemporary times, MacMhuirich poetry and short stories have been chronicled in Alexander Carmichael's Carmina Gadelica, Angus MacLellan's Stories of South Uist, Thomas Owen Clancy's The Triumph Tree (Scotland's Earliest Poetry 550-1350) and An Leabhar Mor – The Great Book of Gaelic. The ancient and historic MacMhuirich name and its anglicized equivalent Currie can be found throughout the Western Highlands and Islands of Scotland.

As a child, Simon learned trumpet and trombone, piano and bells. Simon studied both physics and archaeology at university and applies this training to the early Gaelic harp, hence his expertise about the physical instrument, and his interest in its design, ergonomics and stringing. He was key to the Historical Harp Society of Ireland commissioning its series of student harps from David Kortier, and designed the string regime for each one, based on years of experiments with brass, silver and gold strings. Simon often gives advice on wire stringing to individual harp players . He is also regularly consulted by early Gaelic harp makers from various countries seeking advice and technical information on both modern reconstructions and the extant historical instruments.

In 2007, he commissioned a replica of the medieval Queen Mary Harp held in the National Museum of Scotland from sculptor, Davy Patton. This beautifully decorated instrument with its precious metal strings forms the inspiration for Simon's investigation of the Gaelic harp traditions.

Simon is Honorary Secretary of the Historical Harp Society of Ireland and Assistant Director of its annual summer school, Scoil na gCláirseach.