Annual Event will Celebrate Gaelic Culture with "An Leabhar Mòr"

New York, NY - “Tartan Day on Ellis Island” – the nation’s largest Tartan Day celebration - returns for its 11 annual observance with the opening of “An Leabhar Mòr” (The Great Book of Gaelic.) The exhibition, organized and produced by Pròiseact nan Ealan, the Gaelic Arts Agency, Stornoway, Isle of Lewis, Scotland, opens on Sunday, March 31 and runs through Sunday, April 8. The exhibition celebrates the art and poetry of the Gaelic-speaking people of Scotland and Ireland. 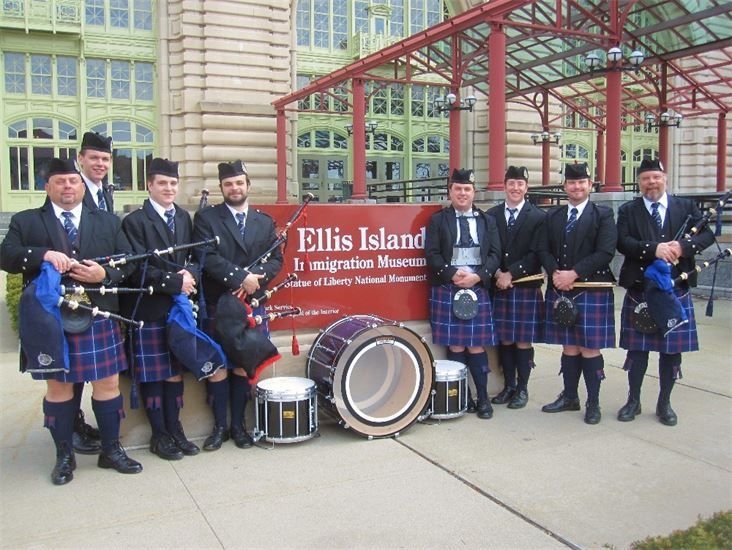 “Tartan Day on Ellis Island” is produced by the Clan Currie Society – one of the country’s leading Scottish heritage organizations. The Ellis Island event will open NY Tartan Week – a two-week festival of all things Scottish, including a Scottish fashion show, whisky tastings, and the annual parade.

The Great Book of Gaelic

"An Leabhar Mòr" is the 21st century equivalent of the Gaelic masterpiece, the "Book of Kells." It brings together the work of more than 150 Gaelic poets, visual artists, and calligraphers. Scotland and Ireland share a mythology, a rich music tradition, languages and some very formative history. Irish Gaels, known as Scoti, invaded Scotland in the 5th century and gave it their name.

"An Leabhar Mòr" as a book is an artwork in itself which presents a major collection of Gaelic artwork. It renews and highlights the cultural connection between Gaelic Scotland and Ireland. At the same time it celebrates the diverse strands of contemporary Celtic culture.

It is a beautiful book featuring poetry from every century between the sixth and the twenty-first. It contains the earliest Gaelic poetry in existence. One hundred contemporary visual artists - in a variety of media - respond within its pages to one hundred works of poetry spanning the ages.

It includes work by poets Nuala Ni Dhomhnaill and Mairi Mhac an tSaoi and by artists Allan Davie, Will Maclean and Rita Duffy among others. The exhibition "An Leabhar Mòr" - The Great Book of Gaelic is based on and inspired by this extraordinary book. 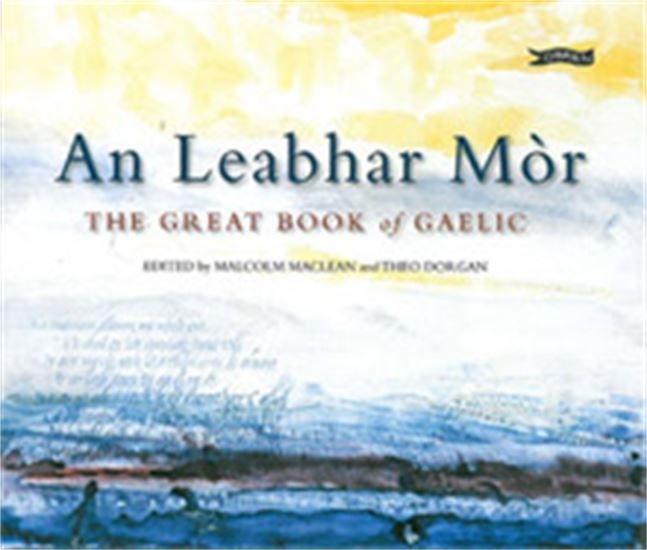 According to Malcolm Maclean, the exhibition's co-curator, "An Leabhar Mòr" is all about making connections between Ireland and Scotland, between literature and the visual arts, between poetry and song, between Irish and Scottish Gaelic, between over a half millennia of Gaelic civilization and the English-speaking world. There is more to the Leabhar Mòr than its aesthetic value, or its value as an introduction to Gaelic civilization. It is also a gaelic project without a trace of either cultural cringe or of exaggerated assertiveness. How wonderful that this important exhibition has found its way to Ellis island - the Golden Door to America for so many Scottish and Irish immigrants."

For Clan Currie Society president and Tartan Day producer Robert Currie, the visit to Ellis Island is fortuitous and inevitable. "The exhibition speaks to the heart of our Clan's rich Gaelic history. For 700 centuries, MacMhuirich, or Currie bards in Scotland trained in Ireland and composed many gems of bardic verse for their Scottish patrons. Indeed, out of the 100 poems selected for the exhibition, three of them were written by members of the Clan Currie."

The International Tour Comes to New York for Tartan Day

"An Leabhar Mòr" has moved from strength to strength since its initial publication in 2002. An international touring exhibition of 100 artworks featured in the book is still on the road a decade later. Having completed a successful tour of Ireland in 2006-2007, the Great Book exhibition has recently delighted audiences throughout Canada and is currently working its way round an extensive tour of North America. The tour demonstrates the unique nature of the project, its sustainability and long-term impact on audiences throughout the world.

In the Ellis Island venue, the exhibition "An Leabhar Mòr" will feature, alongside the poetry and artwork, a series of contextual panels of particular relevance to the themes of immigration and the Ellis Island experience. Panels will explore the meaning of Gaelic identity and culture with a special emphasis given to Scottish and Irish immigration to America.

The exhibition will be on display adjacent to the Registry Room, the Great Immigration Hall on Ellis Island on the museum's second floor. In addition to Maclean and Currie, the Ellis Island exhibition team also includes researcher/writer Marsha Lebby and Gaelic scholar Michael Newton. Plans are also underway to establish an exhibition annex at Poet's House on Manhattan's lower west side.

Starting on Tartan Day (Friday, April 6) through Sunday, April 8, Ellis Island will play host to some of the finest Scottish entertainment in New York City, including the Rampant Lion Pipe Band, a Celtic harp circle led by Mia Theodoratus, the New York Metro Pipe Band and the NY Celtic Dancers.

Support for the exhibition has been generously provided by the Gaelic Arts Agency, the Clan Currie Society, Scotland's Islands and Creative Scotland.