“Scots in the American West”

“Tartan Day on Ellis Island” – the nation’s largest Tartan Day celebration - returns for its 13th annual observance with the opening of “Scots in the American West.” The exhibition, produced by Buffalo Bill Center of the West, Cody, Wyoming opens on Friday, March 28 and runs through Sunday, March 30. The exhibition documents the individual accomplishments of Scots in the American West.

“Tartan Day on Ellis Island” is produced by the Clan Currie Society – one of the country’s leading Scottish heritage organizations. The Ellis Island event will open NY Tartan Week – a two-week festival of all things Scottish, including a musical military tattoo, the Dressed to Kilt Scottish fashion show, Whisky Live - whisky tastings, a gala dinner with the National Trust for Scotland - USA Foundation, a Scottish run in Central Park and the Tartan Day Parade.

Scots in the American West

In the late 1600s, Glasgow was the European center for the Virginia tobacco trade, and Scots Presbyterian dissenters in search of religious freedom established their own colonies in South Carolina and New Jersey. In the 1700s, population growth, agricultural modernization, and political upheaval in Scotland were the driving forces behind more than 50,000 immigrants crossing the Atlantic, and, as the new Republic looked West toward the end of the century, many of the earliest “over-mountain men” settling the Ohio and Tennessee valleys were of Scots or Scots-Irish descent.

It is little wonder then that in the 1800s as the United States expanded into the areas we now think of as the American West, Scots were so much to the fore. Their stories reflect the collective contributions of the Scottish impact on the extensive and dynamic history of the American West. Scots endured a land with an unforgiving climate and rugged terrain. Theirs was a violent land defended by native people protecting themselves from cattle thieves, feuding families, and outside invaders. Over many generations, Scots suffered through battles and massacres. These were people accustomed to taking risks, overcoming obstacles, and starting new lives. Their characteristics shaped their own country as well as the distant lands that became their new homes—including North America.

The exhibition also explores the profound impact of Buffalo Bill’s Wild West Show made on the people of Scotland during his European tours which took place in 1891-2 and in 1904.

Commenting on the exhibition’s journey from Cody, Wyoming to Washington, DC and now to Ellis Island, exhibition curator Jeremy Johnston remarked, “How wonderful that this important exhibition has found its way to Ellis Island - the Golden Door to America for so many Scottish and Irish immigrants and place of their first steps of their journey to the American West.”

Scots in the American West is made possible by the Bill Center of the West, Naoma Tate and the family of Hal Tate, the Clan Currie Society, the National Trust for Scotland Foundation-USA, and the Smithsonian Institution.

A regular feature of all the Tartan Day on Ellis Island celebrations will be music and dance and the 2014 program will be no exception. Tartan Day on Ellis Island will also play host to some of the finest Scottish entertainment in New York City, including the Rampant Lion Pipe Band, New York Brogue – Celtic music ensemble, and the NY Celtic Dancers. 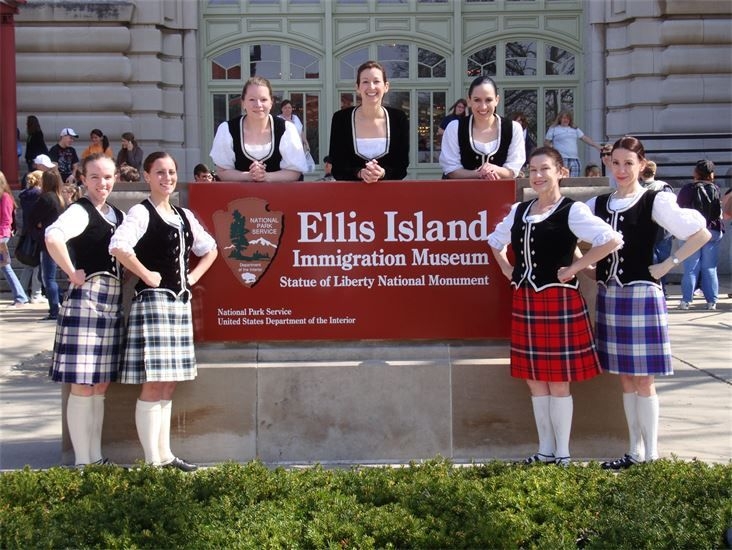 About Tartan Day on Ellis Island

Tartan Day on Ellis Island is one of the principal Scottish heritage events in the United States. Playing host to literally thousands of domestic and international visitors each day, it is the largest Tartan Day celebration in the world. Ellis Island is a fitting place to observe Tartan Day. The island and its historic buildings represent America's "Golden Door."

Describing the program, noted Scottish journalist and author Roddy Martine reported that of all the Tartan Day events held in the United States, the Ellis Island observance has, "stood out as a beacon of what USA Tartan Day is all about: the emigrant ancestors of ordinary Americans who over three centuries crossed the Atlantic Ocean to create the world's greatest democracy."

Tartan Day on Ellis Island is produced by the Clan Currie Society - one of the preeminent Scottish heritage organizations in the United States. The Clan Currie Society began its successful collaboration with the Ellis Island Immigration Museum in 2002 in the coordination and sponsorship of their first Tartan Day celebration. That year, Clan Currie and the National Museums of Scotland joined forces to host the traveling exhibit, "Home and Away: Highland Departures and Returns.

As part of the celebrations for Tartan Day 2011, the Clan Currie Society commissioned a specially designed Ellis Island Tartan© to mark the 10th Anniversary of Tartan Day on Ellis Island. Each color in the tartan reflects upon the American immigrant experience. The blue represents the ocean that had to be crossed to reach the American shores. The copper-green is the color of the Statue of Liberty. The red depicts the bricks of the Ellis Island buildings where 12 million Americans took their first steps towards freedom. The gold is the golden door that is the United States of America and the dawn of a new life in America.

President Woodrow Wilson said of the Scots, "Every line of strength in American history is a line colored with Scottish blood." The contribution of the immigrant Scots upon North America is massive and these people have remained proud of their heritage. However, unlike the Irish and St. Patrick’s Day, Scottish-Americans did not have a national day of identity and celebration. In 1998, National Tartan Day was officially recognized when the US Senate passed a resolution recognizing April 6th as National Tartan Day. This was followed by a resolution which was passed by the US House of Representatives in 2005. The date commemorates the signing of the Declaration of Arbroath in 1320, which asserted Scotland's freedom over English territorial claims, and may have been an influence on the Declaration of Independence. For the most complete listing of NY Tartan Week events, visit www.tartanweek.com.

About the Buffalo Bill Center for the West

About The National Trust for Scotland Foundation - USA

The National Trust for Scotland Foundation - USA encourages Americans to participate in the care of the cultural and natural treasures protected by the National Trust for Scotland. By providing grants that assist in funding urgent conservation activities, the National Trust for Scotland Foundation ensures that the heritage shared by Scots and Americans is safeguarded for current and future generations. The National Trust for Scotland cares for 129 heritage properties ranging from castles and great houses to modest cottages and mills. Two million visitors every year are welcomed to Trust properties, and experience the best of Scotland’s past, present and future. An estimated two million more people visit the islands, beaches, mountains, and nature preserves protected by the Trust. The number of Americans who have Scottish ancestry is estimated to be 20 to 25 million, and Scotland has had an extraordinary influence on the culture and history of the United States. Whether you have Scottish roots or like many Americans, just love Scotland, there are many opportunities for you to participate in the care of its natural and historic places.